The Latest Updates on Train #188

Details about the Train #188 Incident

The NARP team was front and center in the wake of the tragic Amtrak Train #188’s derailment in Philadelphia on May 12. President and CEO Jim Mathews appeared on NPR’s “The Diane Rehm Show” and CBS Baltimore, while VP Sean Jeans-Gail appeared on “CNN Newsroom.”

Below are more links to Media Coverage of Train #188

USA Today - On Amtrak train, where were automatic brakes? Our view

PBS Newshour - How safe is rail travel in the United States?

Washington Post - The future of train safety lies in drones

Rachel Maddow Show - ‘This is on Congress’ head’

Time - How the Amtrak Crash Is Hurting the U.S. Economy

New Yorker - The plot against trains

CBS Money - Where will America's rail system get its funding?

The Week - Despite the Amtrak crash, trains are still an incredibly safe way to travel 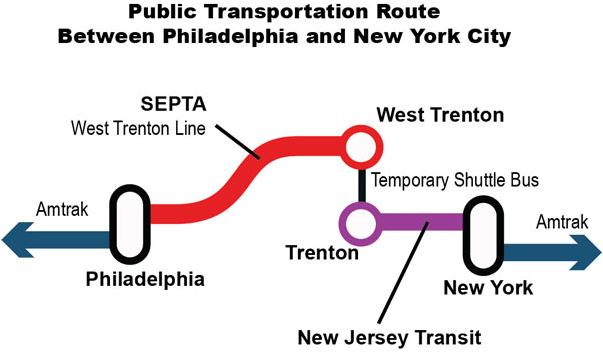 Although there is currently no Amtrak service between Philadelphia and New York, other transportation options are available. Click here to see them.

NARP Expresses Condolences In The Wake Of Derailment Tragedy

The thoughts and prayers of NARP and its 28,000 members nationwide are with the passengers and crew of Amtrak Regional Train 188, which derailed last night in Philadelphia. The association offers its heartfelt condolences to the families of those killed and its sympathies and support to everyone who was injured.

NARP President & CEO Jim Mathews, a former volunteer firefighter and medic, also expressed his gratitude for the efforts of first responders on the scene who worked throughout the night to free the injured and to save lives.

"While NARP will continue to push ahead for a bipartisan, constructive and meaningful debate on the appalling infrastructure investment crisis facing America, today is not the time to push or to speculate on what might have gone wrong," Mathews said. "Today at the top of all of our minds should be the injured passengers; the families of those killed; the dedicated front-line Amtrak employees who strive every day to operate a safe trip for their customers; and the brave men and women who saved so many lives last night."

Safety is always the first concern for any transportation system. Investigators are at the scene in Philadelphia now, and NARP is looking forward to learning more details as they become available from the National Transportation Safety Board, the Federal Railroad Administration and Amtrak.

NARP will make available a resource page for its members and the general public looking for information on service disruptions and alternative arrangements.

Below is a story from the "Morning Joe" show on MSNBC. In it, New York City Mayor Bill De Blasio, a Democrat, and Oklahoma City Mayor Mick Cornett, a Republican, spoke about the need for major infrastructure improvements, including rail. The pair were in Washington, D.C., for events scheduled around Infrastructure Week.

Rail Resources in the Northeast Corridor

Former Pennsylvania governor Ed Rendell is interviewed by Joe Scarborough about the accident and the need to step up efforts to invest in infrastructure.

New Yorker: Amtrak Trains May Be Sort of Empty Today, But They’re Still As Safe As Ever

Washington Post: What does Amtrak derailment mean for riders traveling from DC to NY?

"We would not be in the position we’re in if it weren’t for the advocacy of so many of you, over a long period of time, who have believed in passenger rail, and believe that passenger rail should really be a part of America’s intermodal transportation system."