Washington, D.C. - This summer's travel season may be the last with passenger trains for millions of Americans. The Trump Administration's proposed budget wipes out funding for long distance train service in over 220 cities and towns and in 23 states that will lose train service completely.

"If Congress enacts this budget, our national passenger rail network will largely cease to exist," said Mathews. "Communities and rail passengers need to clearly and loudly tell Congress that our communities and citizens rely on trains as important travel options."

The proposed 2018 White House budget would slash funding for Amtrak, leaving 140 million Americans without access. Other cuts to transit and commuter rail programs will cost thousands of construction and manufacturing jobs, especially in small town America. Budget cuts will place a disproportionate amount of pain on rural and working class communities who rely on rail and public transit services for everyday travel.

Although the threatened services are commonly called long-distance trains, they also serve as local and regional transportation for the communities they serve. In Montana and North Dakota, for example, Amtrak's long distance trains connect nineteen towns and cities on a single corridor. In Florida, twenty eight communities are bound together by long distance routes that offer an important travel option for family and business travelers.

"Millions of people will be left isolated, and those who will suffer the most are those who rely on passenger rail to get to their job, for an ADA-compliant mode of travel, and for people where other transportation options are limited," said NARP Chairman Peter LeCody. "The voices of these people must be heard by members of Congress, and we plan to make that possible during our 'Rally For Trains.'" 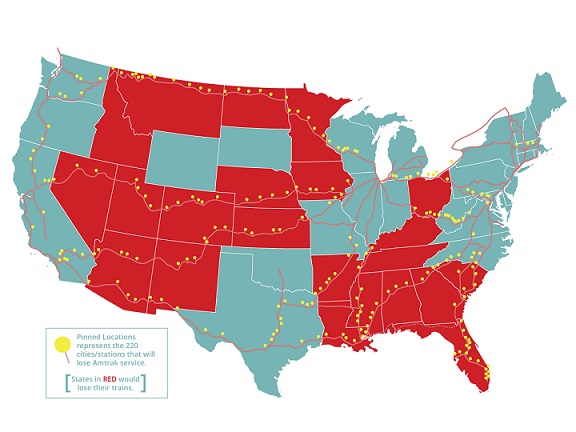 For more information on "Rally For Trains" events, or to contact members of Congress, visit www.TownsWithoutTrains.com.

About the National Association of Railroad Passengers

NARP is the only national organization speaking for the nearly 40 million users of passenger trains and rail transit. We have worked since 1967 to expand the quality and quantity of passenger rail in the U.S. Our mission is to work towards a modern, customer-focused national passenger train network that provides a travel choice Americans want. Our work is supported by more than 28,000 individual members nationwide.

"The COVID Pandemic has been and continues to be the biggest challenge faced by Americans as it has taken a deadly toll on the world and on the world’s economies. During COVID Locomotive Engineers at Amtrak and other Passenger and Freight Railroads have embodied the definition of essential workers. This dedication by our members is not new. We applaud the Rail Passenger’s Association for recognizing the vital contributions of our members and their hard work moving Americans and freight during the COVID pandemic."