Washington, D.C.—The Rail Passengers Association conferred its Golden Spike Award on Transportation & Infrastructure Chair Peter DeFazio today, to recognize his leadership in securing passage of the most ambitious passenger rail legislation in more than 50 years. The strong rail title in the Bipartisan Infrastructure Law is a testament to Chair DeFazio’s 35-year tenure in Congress, where he has been a tireless advocate for America’s rail passengers.

“It is an honor to be recognized by the Rail Passengers Association for my efforts to strengthen and expand America’s passenger rail. Golden spikes were once used by railroads to mark the completion of important rail projects, so I am truly grateful to receive the Golden Spike Award as a way to mark the end of a career that I’ve spent fighting to invest in our country’s rail system. As Chair of the Transportation and Infrastructure Committee, it has been my priority to bolster funding for Amtrak, increase and expand routes, look to the future by supporting high-speed projects, and improve safety, culminating in $66 billion in new funding in the Bipartisan infrastructure Law,” said Chair DeFazio.

The congressman from Oregon has been a powerful advocate for a national passenger rail system that serves all Americans, whether they live in big cities or small towns, and a fierce critic of decades of underinvestment in the U.S. rail system. He has also provided a much needed corrective to the misguided idea that Amtrak—alone, out of all the transportation modes that receive public funding—must make a profit.

Critically, Chair DeFazio has maintained a strong positive vision for Amtrak throughout his time in Congress, advancing a legislative blueprint for passenger trains that would let communities connect more efficiently and equitably. And he did this at a time when others were asking whether the railroad ought to be dismantled. He has also not been afraid to confront host railroads over freight train interference that has led to hundreds of thousands of hours of delays to Amtrak passengers.

“It’s safe to say the Bipartisan Infrastructure Law wouldn’t be nearly as ambitious without Chair DeFazio’s work over multiple reauthorization cycles. He understood that resilient transportation systems require strong public investment, and that the failure to invest in passenger rail has left thousands of communities in the U.S. disconnected from economic opportunity. America’s passengers will miss Chair DeFazio’s passionate and untiring leadership which made so much of the progress we see today possible,” said Jim Mathews, President & CEO of Rail Passengers.

Chair DeFazio has announced that he will retire at the end of this term, though he is playing an active role in leading Congressional oversight of the implementation of new rail programs created by the Bipartisan Infrastructure Law. 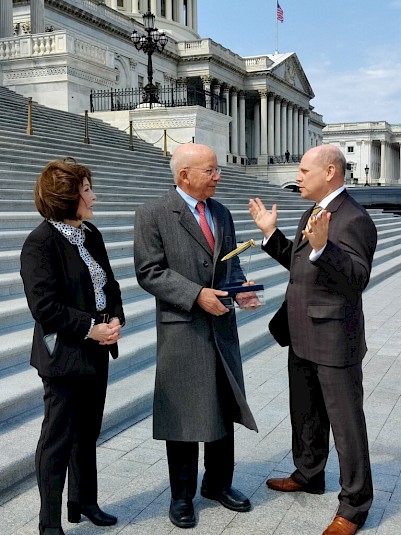 About the Golden Spike Award

Dating back to 1967, Rail Passengers’ Golden Spike honors work done to advance the cause of a robust national rail system in the U.S. It has been awarded to elected officials, advocates, and even celebrities who have made important contributions to passenger rail service. Notable past recipients include former Senator Frank Lautenberg of New Jersey, Senator Trent Lott of Mississippi, and Walt Disney.

The Rail Passengers Association is the oldest and largest national organization serving as a voice for the more than 40 million rail passengers in the U.S. Our mission is to improve and expand conventional intercity and regional passenger train services, support higher speed rail initiatives, increase connectivity among all forms of transportation and ensure safety for our country's trains and passengers. All of this makes communities safer, more accessible and more productive, improving the lives of everyone who lives, works and plays in towns all across America.