Who Runs The Trains When They Quit?

Amtrak is finally acknowledging publicly something it has been grappling with internally for several months: there aren’t enough staff to run the trains, and more may be leaving the railroad.

Don’t look now, but the “Great Resignation” is coming for our trains.

You may have never heard this term, but it’s what labor economists have been calling the phenomenon that has been gripping the U.S. in the latter stages of our Covid pandemic recovery. Here’s a scenario I’m guessing you’ll find familiar: now that you and your family are vaccinated, you feel safer going out and you yearn to return to something like a normal life. You decide to take the family out for a nice dinner, only to find that your favorite pre-pandemic eatery is only open three days a week...or open only until 4pm...or only has one waiter for 30 tables...or maybe there’s a sign on the door that says “Closed: We’re Hiring!”

Welcome to the Great Resignation.

The U.S. Department of Labor’s Bureau of Labor Statistics tracks the labor force in mind-numbing detail, but one of the more fascinating stats is the “quit rate.” That is, how many people are voluntarily leaving their jobs as the economy tries to sputter back to life after a deadly virus swept through the country killing more people than all of America’s wars combined.

Earlier this month, BLS released its August report and it found that for a fifth month in a row, quit rates have reached record highs. “Record” as in never before seen in the history of tracking that statistic. Ever.

Nationwide, about 3% of the country’s workforce across all industries quit in August. That in itself is a huge number. In the “Accommodations and Food Sector” where hospitality can be found, nearly 7% of the workforce threw in the towel in August. At 6.8%, it was nearly twice the rate of any other industry, and it topped the previous record from January 2001 of 6.1%. 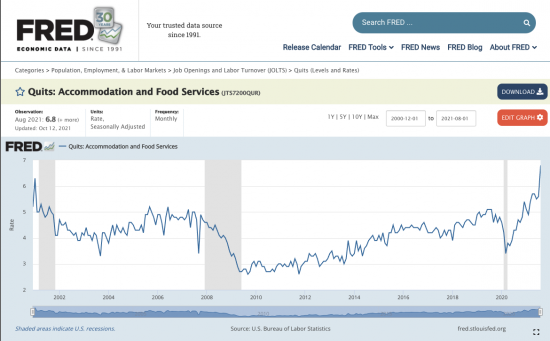 Amtrak is finally acknowledging publicly something it has been grappling with internally for several months: there aren’t enough staff to run the trains, and more may be leaving the railroad. The previous “Date of Doom” was November 22nd – that’s when Amtrak intended to remove from service any remaining staff who are not vaccinated against the deadly Covid virus or do not have a verified medical or religious exemption. Amtrak CEO Bill Flynn today is telling employees that they now have until December 8th to get at least their first dose of a two-dose regimen or present a verified medical or religious exemption.

This is moderately good news in that it buys some time to get past the busy Thanksgiving travel period. It also buys time for some other measures Amtrak has adopted to work, such as increasing the pace of hiring and training and developing incentives to put staff where they're needed most.

But the larger problem remains, and it’s not just because of vaccine hesitancy. Amtrak set some of its problems in motion in 2020 when it furloughed staff to cope with decreased passenger volumes in the wake of cutting trains to three times a week. Then it was made worse by also shutting down the recruitment and training pipeline for new staff. To be fair, Amtrak management did this because they had no idea whether or when the Covid crisis would abate and at the time they did not know where their next appropriation was coming from. It was a tough call, but one designed to preserve cash until some clarity returned.

Despite that thought process, however, I personally – and your Association officially – warned Amtrak, the Federal Railroad Administration, and members of Congress that this was a mistake, just as temporarily mothballing rolling stock was a mistake. In fact, in my congressional testimony I cautioned that dismantling the people and equipment needed to recover to normal service levels would be a real problem when it was time to turn the lights back on.

Well, here we are. Demand for long-distance service held up even during the worst of the pandemic, with nearly sold-out trains even after the three-times-a-week cuts. As service has come back, passengers are complaining about shorter consists, lack of observation cars (can anyone say, “Texas Eagle”?), and two-hour waits to talk to an agent at 1-800-USA-RAIL. The call center in Philadelphia is about to graduate a whole new crop of agents to answer the phones, and that’s a great relief for all of us. But management is warning that a staff shortage in other crafts could well lead to more service cuts in the next few weeks.

There’s a deeper bench in the Northeast Corridor than in other parts of the system, so NEC cutbacks are likely to be milder. There are more staff available in the NEC to fill in for those who leave or are terminated. Staffing on the long-distance routes, however, is thinner and more vulnerable. Losing even a handful of staff could doom us to three-times-weekly service again until Amtrak can re-train and re-staff.

Locomotive engineers are the biggest point of vulnerability. Getting a qualified engineer in place in a long-distance territory is at least a six-month process...and we don’t have six months.

I’ve talked with Amtrak leadership about how we might help as an Association and frankly there are few real answers. We’ve already done our job and done it well. Congress is poised to pass historic legislation with more passenger-rail money than this country has ever spent before. We’ve shored up Republican and Democratic support for passenger-rail policy, primarily in the Senate but also with key allies in the House. We’ve worked with the Federal Railroad Administration and the U.S. Dept. of Transportation to clear the regulatory decks. And we’ve generated excitement for new service among Mayors, county officials and news outlets around the country.

We’re all ready for a transformation in U.S. passenger rail. And now we might fail because of a labor shortage that is partly – but not entirely – Amtrak’s fault. United Airlines’ pilot workforce is about 90% vaccinated. That’s a higher rate than Amtrak. Even so, thanks to a legal battle United is paying $3 million a month to keep unvaccinated pilots on the payroll and out of the cockpit. That’s not something Amtrak can do.

Since the mid-1960s American passenger rail has faced an existential threat of one sort or another. Subsidized competition, balky Class Is, poor rights of way, myths and misinformation. I’m reminded of a scene from the 1997 science-fiction comedy Men In Black, when Tommy Lee Jones reminds his young protégé Will Smith why he can’t fire his weapons in view of the public: “There’s always an alien battle cruiser or Korillion death ray or an intergalactic plague that's about to wipe out life on this miserable little planet. The only way these people get on with their happy lives is that they DO NOT KNOW about it!”

So today as I write this, we’ve taken care of the legislation...the policy...the money...the political will...the local community support...and the press. There’s no more alien battle cruiser or death ray and the intergalactic plague is finally easing. But even after all that, we may still wind up with three-times weekly service again.

In the next few weeks, we need to keep the trains staffed. And now that YOU know about it, you might make a point of thanking your Amtrak crewmember for being on board and working your train at a very stressful and trying time. Encourage your crewmembers to keep at it. Be cheerful, grateful, and encouraging. Give them a pat on the back. Tell them how much you appreciate their service and how much you personally rely on having them there so there’s a train for you to ride. If you’re in the Diner or Lounge or a Sleeper, tip them well. For the sake of our essential service, I hope our hardworking crews can see their way to keeping our trains running.

Maybe a few “attaboys” from our members riding the rails might help.