What the FY23 Omnibus Means for Passengers

Congressional leaders released the text of the Fiscal Year (FY) 2023 omnibus to fund the government yesterday, with the House and Senate expected to vote on final passage by end of week.

Congressional leaders released the text of the Fiscal Year (FY) 2023 omnibus to fund the government yesterday, with the House and Senate expected to vote on final passage by end of week. Appropriators included significant funding for passenger rail and transit grant programs, which will come one top of guaranteed capital funding included in the five-year Bipartisan Infrastructure Bill (BIL).

Importantly, the bill also includes increases in funding for Amtrak and transit operations, which will help stave off some of the service cuts that transit agencies have been warning about in the face of reduced ridership and revenue resulting from a post-pandemic shift in commuting patterns.

In short: the Transportation, Housing and Urban Development (T-HUD) section provides $106 billion for the Department of Transportation, $3.4 billion above FY2022. That number includes $2.45 billion for Amtrak—below the $3 billion requested by the White House and the $3.3 billion requested by Amtrak—but $121 million above what the railroad received in FY2022.

While Rail Passengers Association targeted a higher number for the National Network, we believe this is a positive outcome for Amtrak passengers based on the fierce level of competition for limited T-HUD dollars.

We’d like to thank everyone who contacted their elected officials throughout 2022—thanks to YOU, we were able to deliver thousands of messages to Congress at key points in this legislative cycle. Special thanks goes to our Council of Representatives and everyone who took part in our Spring Advocacy Summit in Washington, D.C.

The bottom line is a $121.6 million increase in operational funding for Amtrak will allow the railroad to continue its hiring push. That will shore up existing services and allow for the hiring of more engineering and administrative personnel. The bill also authorizes Amtrak to use operational funds to partner with other eligible entities on the development of new corridors.

With the passage of BIL, Amtrak went from starvation rations to a healthy funding ecosystem almost overnight, and the railroad needs to ramp up its capacity to efficiently manage upgrades to tracks, signaling systems, bridges, tunnels, and train stations. It must also manage a generational procurement process to renew its aging fleet of railcars. Rail Passengers believes that BIL was a turning point in the history of U.S. transportation, and we must develop the knowhow within the Federal Railroad Administration (FRA) and Amtrak to competently and quickly invest ten-plus billion dollars each year; this bill advances that goal.

Red flags: That doesn’t mean there’re no problems with the bill. Specifically, transportation leaders in Congress may be trying to do too much with the limited National Network grant funding on offer. The bill authorizes up to $66 million to allow Amtrak to help with the development of new routes. However, given Amtrak’s struggles to restore the pre-pandemic frequencies and staffing levels, one could reasonably question how much leeway exists in the National Network operating account. Fortunately, the bill also includes protections for long-distance service. Still, Rail Passengers will be watching closely how the money is spent.

(There’s also a $5 million set-aside for maglev, but that’s a bad penny that appears in every budget. Hats off to their lobbyists, who will be one of the few beneficiaries of this funding.) 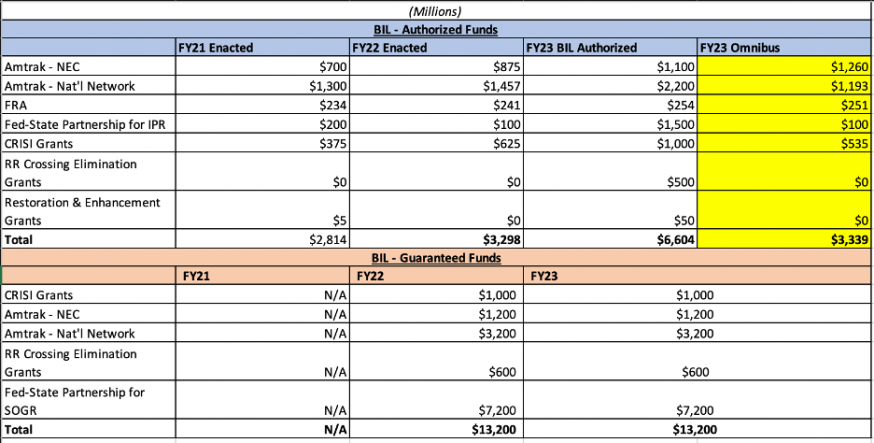 $1.05 billion for the Federal Railroad Administration, including:

$16.9 billion for the Federal Transit Administration, including:

"When [NARP] comes to Washington, you help embolden us in our efforts to continue the progress for passenger rail. And not just on the Northeast Corridor. All over America! High-speed rail, passenger rail is coming to America, thanks to a lot of your efforts! We’re partners in this. ... You are the ones that are going to make this happen. Do not be dissuaded by the naysayers. There are thousands of people all over America who are for passenger rail and you represent the best of what America is about!"