The U.S. House of Representatives voted 220-207 this week to pass a six-bill appropriations package for fiscal year 2023, which includes $3.8 billion in discretionary funding for rail programs. That will come in addition to the $13.2 billion in guaranteed rail funds provided by the Bipartisan Infrastructure Law.

The U.S. House of Representatives advanced a six-bill appropriations package for fiscal year 2023 by a 220-207 party-line vote this week. The bill includes $3.8 billion in discretionary funding for rail programs, which will come in addition to the $13.2 billion in guaranteed rail funds provided by the Bipartisan Infrastructure Law.

The $91 billion Transportation-Housing, and Urban Development (T-HUD) budget was included as part of the six-bill “minibus.” While most of the transportation funds are directed to highways—almost $60 billion—the bill does provide a 23 percent increase in discretionary investments for transit and passenger and freight rail. Amtrak will receive $882 million for the Northeast Corridor and $1.46 billion for the National Network.

The bill now moves to the Senate, where Democratic leaders have stated they will introduce bills through committee action later in July. It’s unclear how far legislation will advance before Congress heads out of town for its traditional August recess.

Congress has until September 30th to pass an FY23 budget to avoid a government shutdown. 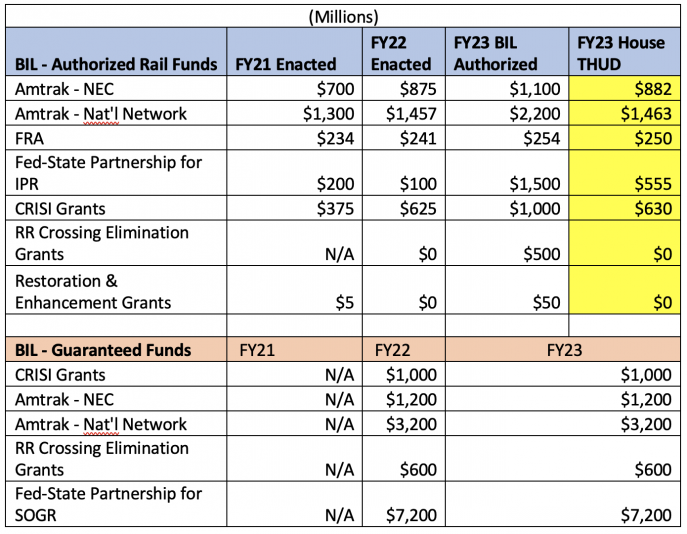 --Amtrak Service Protections: The House T-HUD bill includes language designed to prevent Amtrak from reducing or eliminating NN service. The legislation states that none of the funds made available in the FY23 budget may be used by Amtrak to “discontinue, reduce the frequency of, suspend, or substantially alter the route of rail service on any portion of such route,” except in an emergency or during maintenance or construction outages. These provisions did not prevent service reductions during the pandemic, and it remains to be seen what Congress will accept as “an emergency” now that the pandemic has receded.

--Restoration and Enhancement Grants: this program, which provides operating assistance grants for initiating, restoring, or enhancing intercity passenger rail transportation, was zeroed out in the House’s FY23 T-HUD bill. However, the bill does stipulate that Amtrak may use up to 10% of its $1.46 billion NN grant for the activities outlined in the program. While this will empower Amtrak to launch new services, it would be more meaningful if the Committee had funded Amtrak’s NN account at the levels authorized by this Congress just a few months ago.

--Local Matches: the bill allows Amtrak to use funds from both the NEC and NN grants as the non-federal match in grant applications, empowering Amtrak to partner with states looking to tap into the billions in new passenger rail grant funding guaranteed by the BIL.

--Increase Amtrak Discretion in BIL Spend Plans: Amtrak successfully convinced the Committee that it deserved an official seat at the table in drafting the detailed spending plan for the direct Amtrak grants provided by the BIL. Amtrak argued in its FY23 Legislative Grant request that since it “is an independent government-owned corporation governed by a presidentially-appointed and Senate-confirmed Board of Directors, which is responsible for making investment and capital allocation decisions for the company, the development of these plans is properly a dual responsibility of Amtrak and the Secretary, reflecting their joint role in programming and overseeing Amtrak expenditures.” The Committee agreed, inserting language that requires the USDOT to consult with Amtrak in drafting the annual capital expenditure plan for direct BIL grants to Amtrak, due each year as part of the annual Presidential budget request.

--Surface Transportation Board Passenger Rail Oversight: Report language highlighted the need for improved on-time performance, noting that Amtrak passengers on long-distance trains arrived at their destination on time only 52 percent of the time, compared to 82 percent on-time performance for those traveling on state-supported trains. In light of this, the committee emphasized the importance of establishing and staffing a passenger rail desk with the Surface Transportation Board (STB) -- the agency tasked with providing oversight to the rail industry. The bill provides “not less than $1,000,000 for the STB to staff the passenger rail unit with five [full-time employees] to assist with passenger rail activities, and other activities as appropriate as determined by the STB.”

"When [NARP] comes to Washington, you help embolden us in our efforts to continue the progress for passenger rail. And not just on the Northeast Corridor. All over America! High-speed rail, passenger rail is coming to America, thanks to a lot of your efforts! We’re partners in this. ... You are the ones that are going to make this happen. Do not be dissuaded by the naysayers. There are thousands of people all over America who are for passenger rail and you represent the best of what America is about!"