It was a busy week in D.C., with Congress and the U.S. Department of Transportation introducing several legislative and regulatory proposals that will have far-reaching impacts for passenger trains in the U.S.

The Federal Railroad Administration issued a Notice of Proposed Rulemaking on train crew size that will mandate a minimum of two people in the locomotive cab for trains operating over certain categories of tracks (with a few exceptions).

“For the past few years, our rail workers have worked hard to keep people and goods moving on our nation’s railroads, despite a global pandemic and supply chain challenges,” said U.S. Transportation Secretary Pete Buttigieg. “This proposed rule will improve safety for America’s rail passengers—and rail workers—across the country.”

Freight industry groups like the Association of American Railroads have lashed out at the rule, saying there’s no “plausible safety justification for regulating the number of individuals physically located inside the cab of a locomotive.”

Labor groups, who have fought freight railroads as they have introduced more super-long trains with fewer crew members onto the system, praised the proposal, saying it would increase worker safety.

However, passenger railroads have so far been silent on the proposed rule. While the presence of a conductor onboard most Amtrak and commuter trains should minimize changes to staffing levels, it’s not yet clear how the requirements to have two crewmembers in-cab over certain track segments will impact daily operations.

Rail Passengers is working with industry stakeholders to determine how this proposed rulemaking will affect America’s passengers.

The Senate Committee on Appropriations released its budget for Fiscal Year 2023, including $2.6 billion for Amtrak, a $269 million increase over last year; $2.51 billion for the Federal Transit Administration’s Capital Investment Grants program; $200 million for the Federal-State Partnership for State-of-Good-Repair for the replacement, rehabilitation, and repair of intercity passenger rail infrastructure; and $535 million for the Consolidated Rail Infrastructure and Safety Improvement (CRISI) program, which can be used for freight and passenger rail projects such as stations or platforms, rail line relocation or improvement, highway-rail grade crossing improvement projects, and planning and environmental work.

While the Senate funding levels for Amtrak are higher than those proposed by the House, the Fed-State Partnership grant program is $355 million less than what the House passed earlier this month. These figures don’t include the billions in guaranteed funding that are included as part of the Bipartisan Infrastructure Bill (BIL). 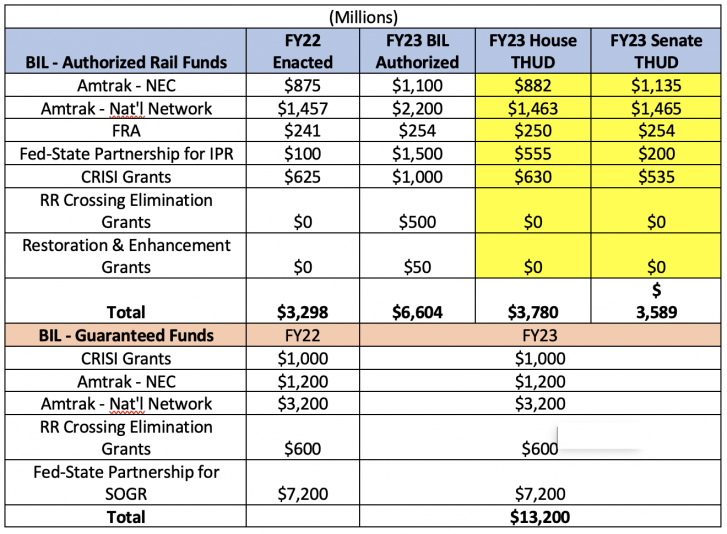 Corridor and Identification and Development Program [CIDP] – [Once passenger rail corridors are selected as part of this BIL program, the USDOT] shall partner with eligible entities that submitted each proposal, relevant States, and Amtrak, as appropriate, to prepare a service development plan to help advance the implementation of the intercity passenger rail service. To facilitate this effort, the Committee recommendation includes up to $40,000,000 for Amtrak to carryout activities for corridors selected under CIDP.

National Network Services - Amtrak’s long-distance routes provide much needed transportation access in hundreds of communities and for rural areas where mobility options are limited. Equally important are routes that provide service to rural areas from urban areas along the Northeast Corridor. During floor consideration of the Committee’s fiscal year 2019 bill, the Senate voted 95–4 in favor of an amendment to express a sense of Congress that long-distance passenger routes should be sustained to ensure connectivity for the 4.7 million riders in 325 communities in 40 States that rely on this service. The Committee does not support proposals that will inevitably lead to long-term or permanent service cuts or segmentation of routes, which will lead to less service for rural communities.

A mark-up date for the Senate Appropriations Committee hasn’t been scheduled. The full Senate must pass this legislation before a conference committee can be convened to hammer out differences between the House and Senate budgets. Congress must pass a budget before October 1 to avoid a government shutdown.

Senate Democrats have released the text of the Inflation Reduction Act of 2022, a bill that will invest heavily in expanding domestic and renewable energy, along with other technologies designed to increase energy efficiency and lower harmful emissions.

Unfortunately, the $10 billion in dedicated funding for electrified high-speed rail included in previous drafts did not make the most recent version of the bill. Instead, the Senate’s draft legislation was largely focused on funding the transition to electric automobiles—another in a long line of subsidies for highways.

Rail Passengers expressed our frustration at this oversight to Politico, which looked at reactions from various transportation groups across the U.S.:

“It is a bitter pill in terms of rail and transit, which is the one clearly established, low-carbon emission transportation systems we have going,” said Sean Jeans-Gail, vice president of government affairs and policy at the Rail Passengers Association. “It does feel like this is going to lock in highway dominance.”

Jeans-Gail also noted that the uptick in EVs would further accelerate the collapse of the federal highway trust fund that is bankrolled by gasoline taxes.

Still, Jeans-Gail said the bill is a good step forward, even if rail loses out.

“As a citizen of the planet, I’m happy they’re doing something,” Jeans-Gail said.

"The Rail Passenger Association's recognition of the essential work done by SMART-TD members aboard Amtrak during this difficult period is appreciated. The Golden Spike Award serves as a testament to the compassion and dedication our conductors, assistant conductors and other workers exhibit constantly through times both ordinary and extraordinary."