It Didn’t Have to Be This Way

Last Friday, October 7th, dozens of passengers endured a nightmarish 19-hour trip on Amtrak’s westbound Wolverine, stranded for many hours without heat, ventilation, lights, food, or working toilets. Thirteen hours late and seemingly trapped, some of them felt they had no choice but to open the doors, hop off the train, and take their chances. On active rail right-of-way. At night.

It was dangerous and embarrassing. And it didn’t have to be this way.

I’ll never claim that technical problems should never happen, or that service disruptions are always avoidable. We all know better. I certainly do. There are engineering explanations for what went wrong with the locomotive on that train, and why head-end power couldn’t be restored, and so forth. Those answers will emerge. But that’s not my complaint. How Amtrak responded to the problems is where I am most concerned. It's clear that everyone involved was just not up to the task.

Large bipartisan majorities of Americans support more investment in passenger rail and in Amtrak. Last weekend, Amtrak failed dozens of those Americans and quite possibly burned up goodwill some of us have spent decades patiently building.

The thing is, we’ve been here before. This past winter, a freak snowstorm left Amtrak passengers on a northbound train from Roanoke stuck for awhile in rural Virginia. Some of our own Council members were on board that train, and we worked with the offices of both Virginia Senators – Tim Kaine (D) and Mark Warner (D) – to get answers. In early February, Amtrak responded by sending a formal six-page letter to both senators' offices pledging several initiatives that would mitigate the kinds of service-delivery and passenger-communications failures that made the Senators concerned enough to intervene.

Amtrak said then that they would develop a new process to ensure that the Emergency Management and Transportation teams work more closely together during major disruptions, that they would get the social-media team to develop guidelines about how to use their tools to keep passengers informed during service disruptions, that going forward Amtrak would assign at least two managers to a train that is involved in a major service disruption to support passengers and on-board crews, and they pledged to “endeavor to provide alternative accommodations locally, as well as alternate transportation for passengers.”

Eight months later, and it looks as if these things didn't happen, or they were executed very poorly. 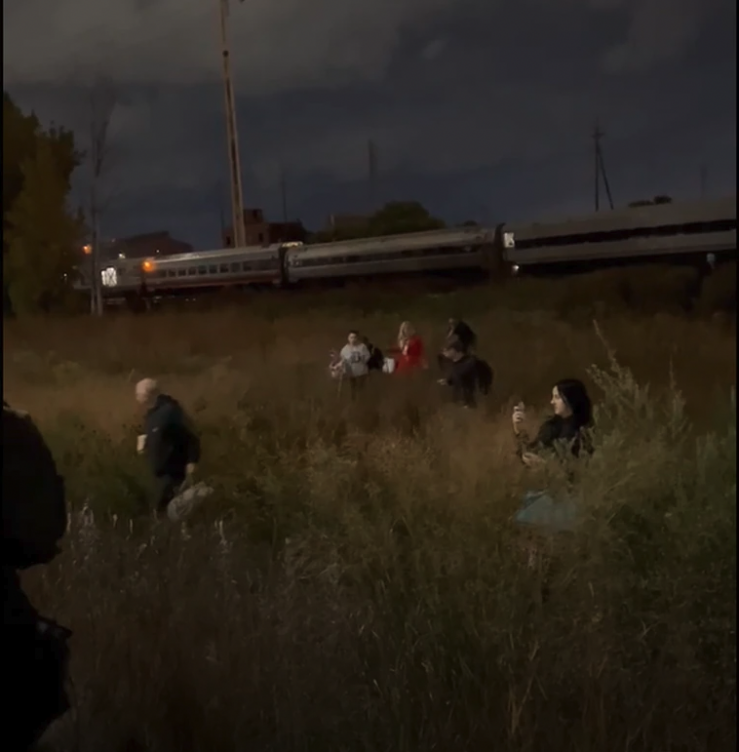 The blurry picture included with this post is a screengrab from a video shot by one of the passengers on that ill-fated Wolverine trip. She shared that video with me, and then she and I corresponded at some length today about the circumstances. What she told me made my blood boil:

"Myself and 3 others hopped off the train at around 10pm after being stuck on the train since 6:30am. This was about 2 hours after we came to a complete stop in Gary, Indiana across from Ameristar Casino. We detrained and had to cross 3 active tracks, a field, and hop a fence to get to the side of a highway where we were able to catch an Uber to take us the rest of the way to Chicago. We understand that this was a very risky thing to do, but in the moment we all felt it was safer than staying on the train without power, overflowing bathrooms, no food, and not know what would happen because no one was communicating to us."

Let that sink in.

Let me repeat what I said above. Nobody, especially me, is saying that crises won’t occur or that disruptions are always avoidable. But from where I sit, it looks as if the lessons from this winter’s meltdown in Virginia have gone unlearned. This is not a case of underfunding or creaky infrastructure. This was just an operational team unprepared to take care of passengers during a series of cascading failures. And it can’t go by without critical review.

The shame of it all, of course, is that Amtrak and passenger rail were enjoying a renaissance. Even in the depths of Covid, Americans flocked to travel Amtrak; ridership was down, but so were the number of available trains and capacity. When those trains were available, passengers paid their fares and rode. Recall earlier this year when we released the results of our nationwide polling, Americans told us overwhelmingly they want passenger rail and really want and need Amtrak to succeed. Some 78 percent of Americans we polled nationwide say it’s important for the country to have a strong passenger rail system. 61 percent say that even the $66 billion in the Bipartisan Infrastructure Law wasn’t enough. 66 percent support a national railroad plan. And even 57 percent of those polled who don't ride trains said they support more investment in passenger rail!

Their message is clear. Americans want trains. They need trains. But they want them to be on time, and reliable, and clean, and modern, and safe. And they want to be confident that if something goes wrong – as it inevitably will – there is a team of competent professionals ready to spring into action, reacting smoothly and calmly to resolve the problem. Images of distraught passengers fleeing a train by letting themselves out and crossing active freight rail right-of-way in the middle of the night do not inspire confidence.

We’re not sitting by idly. I’ve already started working this week to get real answers to what went wrong. Where were the buses? What was the backup plan? Where were the managers? Who was in charge? I’ve already been contacted by congressional offices, and by key Administration officials. And I’ve already asked Amtrak to explain in detail what went wrong and how they’ll make sure it doesn’t happen again. It’s absolutely critical to recognize that it did not have to be this way, and that there can simply be no “next time.” This cannot happen again.