The July 29, 2022 extension of the ETHAN ALLEN EXPRESS from Rutland to Burlington, along Vermont's Western Corridor, will restore an interstate passenger train service lost 69 years ago, in June 1953. This will be the longest time any major rail line in the US has been without interstate service and then regained it.

The Rutland Railroad, prior to a June 1953 strike, had operated passenger service the length and breadth of Vermont. Passenger trains ran from Ogdensburg, NY and Montreal, Quebec through Vermont via Burlington to a rail hub at Rutland. There most trains divided to serve both Boston (via Bellows Falls, VT and Keene, NH) and New York City (via Troy, NY and the New York Central’s “Water Level Route” to Grand Central Terminal). Through passenger cars were exchanged by the Rutland RR daily with the New York Central, Boston and Maine and Canadian National Railways to reach those off-line terminals.

Demand for Rutland RR passenger trains had been strong throughout World War II, but after the war private cars, improved paved roads and competition from trucks for the milk, mail and express business deeply eroded Rutland RR income from these trains. Interim actions to stem a growing deficit included cutting the crack daytime “Green Mountain Flyer” back from Montreal to originate in Burlington, plus eliminating many local trains and raising fares—but none of these measures was enough. Passenger losses threatened to bankrupt the line.

In June 1953 the Rutland Railroad responded to a strike by its operating unions by suspending passenger service. It was never restored, even though it was also never properly ok’d by the ICC either. A second strike in 1960-61 killed the Rutland RR outright. Running no passenger service postponed bankruptcy for less than a decade.

But all was not lost. The state of Vermont purchased most of the Rutland’s mainlines, including both the Hoosic Junction to Burlington (via Rutland) route (over which the ETHAN ALLEN EXPRESS will operate between Rutland, Middlebury, Vergennes and Burlington beginning July 29) and the Rutland to Bellows Falls line.

Sadly, the legendary "Island Line", with its better than three mile-long causeway across Lake Champlain north of Burlington, did not survive. There were few on-line shippers there, and the route needed a full rebuild, including the automation of its three hand-cranked(!) swing bridges. Today, the Island Line’s southern causeway still extends over 3 miles across a bay of Lake Champlain as a bike/hiking path--offering incredible views of the lake and the Green and Adirondack Mountains. A unique bike-ferry replaces the lost swing bridge. But trains will not pass this way again—alas—as a future service from Burlington to Montreal might have been an hour faster via this line than over the longer route that survives. But hindsight is always perfect!

This move to state ownership was a first in the post-war era anywhere in the country. The state leased operations of the remainder of the Rutland lines to the Vermont Rail System (VRS), which has done an amazing job of rebuilding freight service, not only on the former Rutland mainline, but also on the former Delaware and Hudson Whitehall to Rutland Branch, which VRS owns directly through its Clarendon and Pittsford RR subsidiary. This line already hosts the ETHAN ALLEN EXPRESS.

VRS has a long history of support for passenger service. Under the leadership of both founder Jay Wulfson and now C.E.O. David Wulfson, VRS has run its own excursion trains in the manner of proper mainline services, as well as since 1996 hosting the ETHAN ALLEN EXPRESS from Whitehall to Rutland and momentarily to Burlington. VRS owns a fleet of beautifully maintained coaches from the Jersey Central/NJ Transit, as well as a rank of 1937-era Budd streamlined former Santa Fe coaches now converted to remarkably attractive art-deco diner and lounge cars. They are a class act on every level!

Vermont Senator James Jeffords is the true father of the ETHAN ALLEN EXPRESS service, as he got the first $3.5M in Federal funding to get to Rutland from Albany in 1996. When combined with a $1M investment from the Vermont Rail System/VRS and $743,000 from the state of Vermont, this funded track upgrades to bring the train from Whitehall (on the active ADIRONDACK route) to Rutland. Service began in December 1996. Vermont Governor Howard Dean ok’d the needed subsidy to Amtrak to permit this service—as he had done the year prior when he agreed to support the VERMONTER on the Connecticut River Line.

Amtrak has enjoyed truly bi-partisan support at the state and Federal level ever since. Jeffords, and then his successor (first as Congressman, then as US Senator) Bernie Sanders, plus Senator Pat Leahy and Vermont Democrat Party Congressman Peter Welch have continued to strongly support this effort to extend passenger service north from Rutland to Burlington. Over the 26 years since 1996 over $115M has been invested by the state, the USDOT and the Federal Government, through multiple grants across multiple and multi-party administrations, to bring the ETHAN ALLEN EXPRESS train back to Burlington on July 29. In Vermont, bi-partisan action survives and often is successful.

A symbol of this collegiality is the consistent support of Congressional staffers for rail from all parties. Most notable would be Jeff Munger, who served Republican Senator Jeffords as an aide with a focus on transportation. When GOP Senator Jeffords retired, Jeff went to work for self-proclaimed Independent Democratic Socialist Senator Bernie Sanders, superficially changing party labels, but consistently supporting the idea of returning passenger rail to western Vermont (and over the VERMONTER route as well). Tragically, Jeff Munger passed away this spring just before the 26-year project was finally completed—but I know he will be all abord on the first run.

A less remarked upon feature of the new Burlington ETHAN ALLEN EXPRESS service will be the opening of a new station in Middlebury (across the street from the historic depot now in private ownership) and to the restored historic 1851 Vergennes depot and to the 1916 Burlington Union Station.

Certainly, the 1851 joint Vergennes/Ferrisburgh station must be one of the oldest in the country to see regular Amtrak service. This depot was moved about a quarter mile to a new, more visible location off VT 22A, and has a large parking lot and a multi-modal bus/rail platform complex. Both the new train, and the twice daily Burlington to Albany Vermont Translines "Ambus" will serve this location. With its large park-n-ride lot, it is a model of multi-modality!

Burlington Union Station closed for passenger service in June 1953, but then served for many years as the home of Green Mountain Power. During that era the original skybridge section, which extended over the platforms, was removed, and only one track was ultimately retained (to this day).

A subsequent sale to Main Street Landing brought about an improbable renaissance. A new track-side concourse was constructed (this track-side level area now is owned by VTRANS), while on the upper level and in new wing units, attractive offices and apartments were built.

From the start the management of Main Street Landing/Union Station dreamed of the return of Amtrak. From 2000-2003 VTRANS ran the experimental "Champlain Flyer" commuter service from here to South Burlington, Shelburne and Charlotte. Although this was not successful, the platform area had regained a proper train-shed and now the platform itself has been made ADA compliant, with the boarding level raised to 8 inches above the rail-head. Long-time Main Street Landing General Manager Melinda Moulton deserves immense credit for the renaissance of this magnificent building.

Following are a few historic pictures and other more recent photos I took of these stations, as well as a Wikipedia winter scene of the then just completed Middlebury platform. Also included are some pages from the Spring 1940 Rutland RR public timetable, which illustrate how extensive Rutland RR passenger service once was.

I will be riding the first trip from Burlington to Rutland, after working on the Vermont Rail Advisory Council to VTRANS for over two decades to make this possible. I plan to go down to Rutland by train and return on the Vermont Translines “Ambus” service, which accepts Amtrak tickets and goes to/from the Amtrak Albany, NY hub station.

From July 29 Amtrak and Vermont will offer three services each day from Burlington and Rutland to connect to the Empire Service and national network at Albany. Two Vermont Translines “Ambuses” will bracket the ETHAN ALLEN EXPRESS every day.

In follow-up blogs we’ll talk about earlier Vermont Amtrak era successes including the VERMONTER service on the former Central Vermont Ry route, and we’ll share the first day experience on this new line. 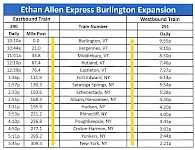 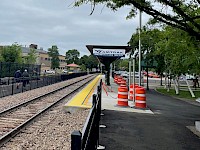 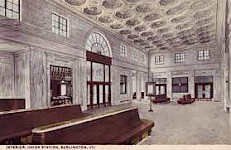 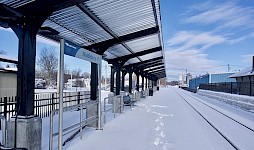 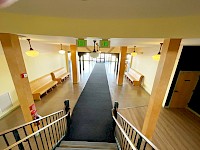 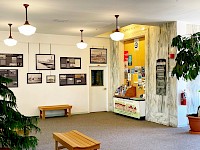 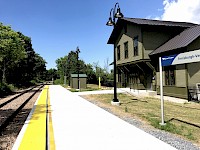 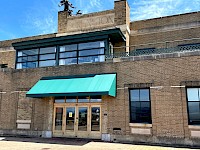 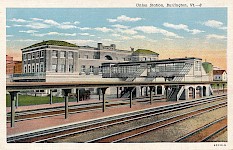 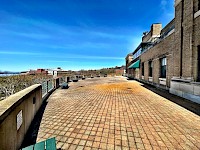 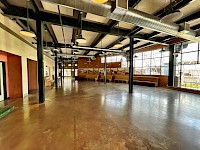