A couple of years ago, Rail Passengers President & CEO Jim Mathews and VP of Government Affairs & Policy Sean Jeans-Gail sat down with Senator Joe Manchin (D-WV)’s office to begin to discuss bringing the Cardinal to full daily service for the first time since the train was revived in 1982. Senator Manchin, having already worked to bring back the station agents to Amtrak stops in his home state, was personally vested in the subject.

Those talks quickly morphed into, “well, why don’t we push to make both the Cardinal & Sunset daily?”. Something your Association has been fighting to do for years. We, of course, were onboard.

During the Infrastructure Investment and Jobs Act (IIJA) process, the talks with Senator Manchin evolved once again to include, not only the two non-daily services, but the possibility of restoring any former Amtrak services that were lost over the decades.

The rest, as they say, is history.

As we all know, the IIJA was passed a year ago next week and Bipartisan Infrastructure Law (BIL) was born - and with it: 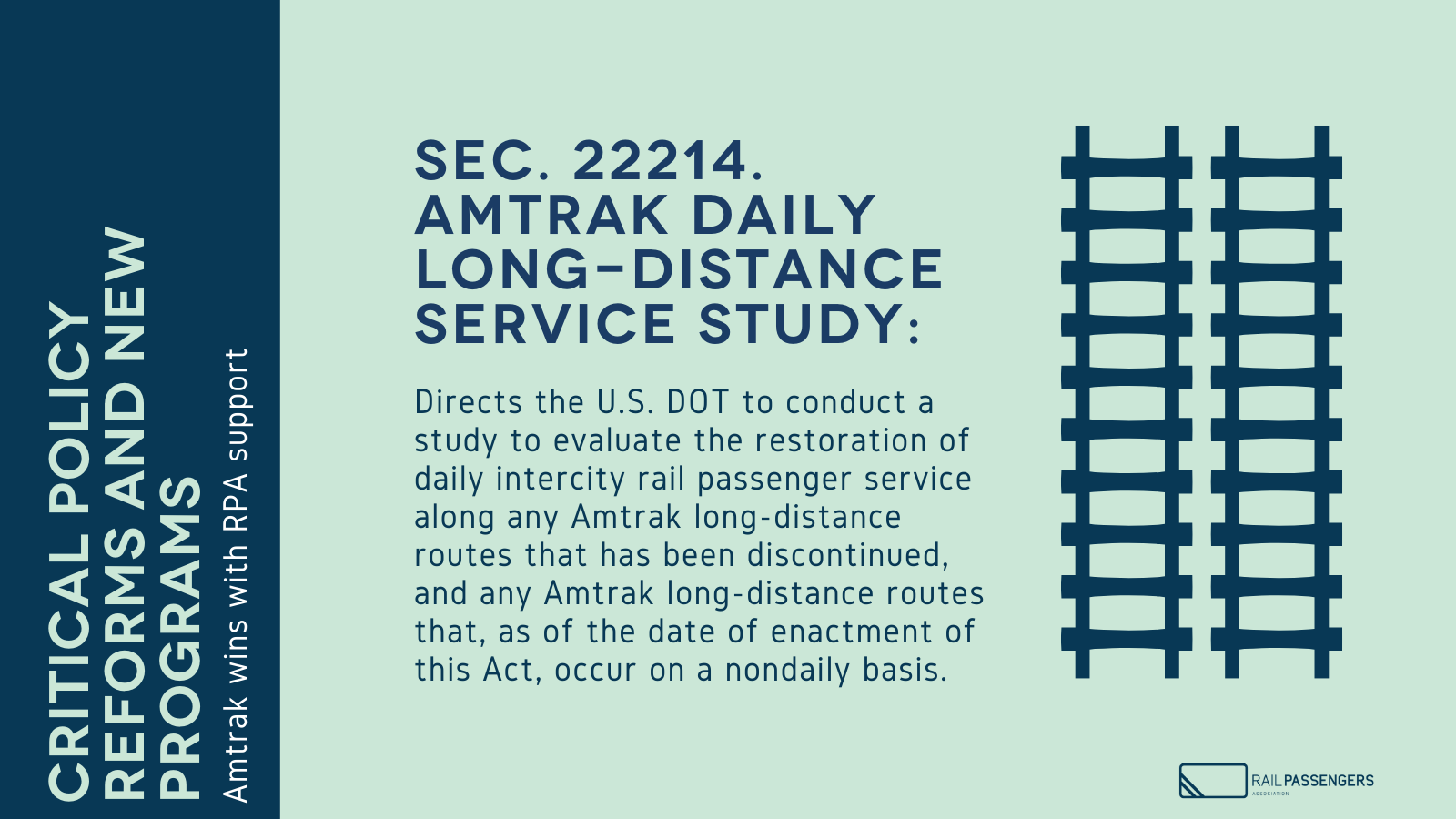 This week, thanks to Section 22214 of the BIL, the Federal Railroad Administration (FRA) launched its official long-distance study website. It gives you the who, what, and why of the process the FRA is about to undertake over the next two-years.

The “what” breaks down what they are looking at. As mentioned above, it’s not just the current “nondaily” service routes. The FRA will be looking at ANY currently discontinued Amtrak route. This study will examine, for instance, bringing back such services as the Pioneer (Seattle to Denver), the Desert Wind (SLC to Vegas), the National Limited (KC to NY/DC), or even the Gulf Breeze (NYC to Mobile).

The “why” of the website covers exactly that: “why should they study long-distance rail?”. As any of our members and supporters, and you will hear a number of answers to this question. The FRA does give a very honest and direct one:

“The Long-Distance Service Study presents an opportunity to establish and bolster essential intercity passenger rail connections and build a stronger rail network overall—one that would allow people to get where they need to go safely and efficiently.”

Both Jim & Sean have had meetings with the team at the FRA who is putting all this together, and this site is just the beginning of the overall efforts. Sign up for more information through the FRA page and, of course, we will be sharing what we can through all of our channels.

When we say we are “at the table” or “part of the process”, this isn’t lip service to make ourselves sound more important to the public. We are an important stakeholder in this entire study effort and, as you read above, have been for quite some time.

Whether it’s through this FRA study program, or the ongoing Congressional F&B Working Group, we are directly involved and continue to fight on behalf of all passengers.