Rail Passengers reported yesterday that the Bipartisan Infrastructure Framework (BIF) was “a welcome first step,” but well below what was outlined in President Biden’s ambitious plan to transform passenger rail based on a review of summary documents. However, I’m happy to report that the release of the draft bill text suggests our original analysis was too pessimistic.

Having reviewed the draft bill text integrating the BIF and the Senate’s Surface Transportation Investment Act (STIA) of 2021, it appears that Senate has combined the two investment bills to create a truly ambitious investment program in passenger rail in the U.S. Combining both the BIF and STIA 2021, the bill outlines $102 billion in rail investment over the next five years – a transformational figure. (NB: the final text of the bill is expected to be filed in the Senate tomorrow, so this analysis is based on a discussion draft Rail Passengers received earlier today.)

It’s important to note that future appropriations aren’t guaranteed in the absence of a passenger rail trust fund. That means only $66 billion of the rail funds are guaranteed, with the remainder at the discretion of appropriators. There’s no assurance that the additional $36 billion in investment will ever fully materialize. This creates uncertainty in how the guaranteed funds would be used, hindering the ability of States and Amtrak to effectively execute multi-year capitalization plans.

However, it is also true that the draft text of the Senate’s bill reveals a more ambitious vision for passenger rail than we first credited it with. It provides Amtrak with $22 billion in dedicated capital funds, allowing it to address maintenance backlog of rolling stock, facilities, and stations; acquire trainsets to replace obsolete equipment – including on Amtrak’s long-distance and state-supported services; and upgrade reservations, security, training centers, and technology. It also guarantees $36 billion in competitive grants to make repairs and upgrades to the NEC and the National Network, including both State-supported and long-distance routes.

And finally, it gives passengers an opportunity to organize to secure that outstanding $36 billion in coming years. While it will be difficult to convince appropriators to provide capital funds in addition to what the BIF provides, it will be critical that we continue to fight for that additional investment – it’s that funding that determines whether this infrastructure package shores up the existing network or begins the process of significantly expanding service to the tens of millions of Americans who want access to modern train service.

We’ve provided a full funding breakdown of both the STIA and BIF below, and apologize to our members for the incomplete picture we provided yesterday.

Rail Passengers looks forward to improving this bill in conference and – ultimately – working with Congress to ensure that the full promise of this bill is realized. 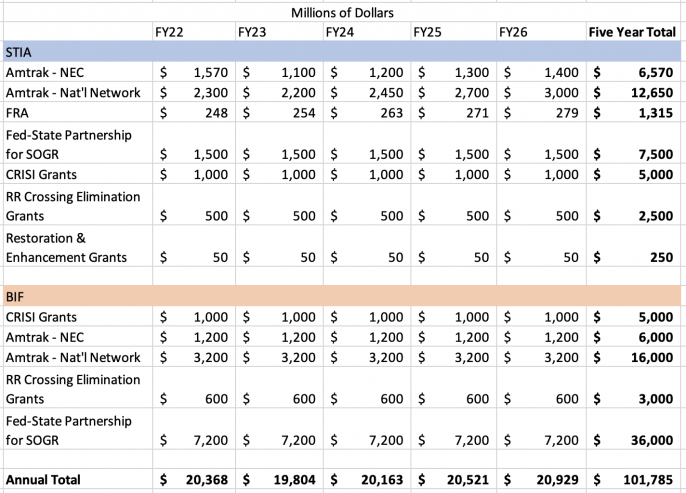